It is with great sadness we share the news that Brian Bancroft passed away in February of this year. Please hold his family and friends in your prayers. 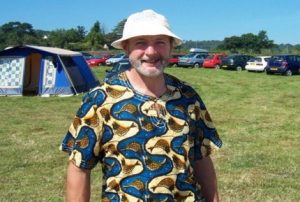 A tribute to Brian, written by Paul Round….

Imagine a field bathed in warmth by the early morning sun.
Rows of white round tents, set in groups sit peacefully – then we hear the sound of a bell, a gentle clanging and then a voice bursts into song. “All things bright and beautiful, all
campers great and small, Leaders wise and wonderful, the Lord God made them all”. “He gave us beds to sleep on and tents in which to dwell and early in the morning you hear this little bell”.
Thousands of campers and adult leaders and helpers have woken to those sounds at WEC Teen Camp over many years as Brian brought the camp to life and started the day. At Teen Camp the daily routine of meals, meetings and activities were all announced by Brian, with his floppy hat, his fluorescent and often odd socks and his bell. This is how many of us will remember Brian.
It was back in 1971 when Brian first took young people to camp, first to Warriors and then as the group got older, to Teen Camp. For a time each summer he did a week at each. In the 1980s when there was no WEC Youth dept, Brian was part of a group who met to pray and plan for the summer and organise the Camp programme for Warriors and Teens. He has been part of the Camp Staff Team for around 35 years and for many of those years he, with Jean, has
been there when camp was set up and there when tents were packed away. He was a strong advocate for Warrior Camp and Teen Camp over many years.
With his jokes, his stories to keep everyone occupied if the kitchen team needed a few more minutes to get the meal ready and those phrases … regarding food ‘if it is going to go to waste, it might as well go to my waist’ ‘the battle for the morning is won the night before’ as he tried to hurry campers back to their tents … with those jokes, stories and
phrases Brian became a legend – and was described as such by many. He was as part of Camp as the tents, tables and benches. His end to every meal has become part of Teen Camp liturgy. “The water’s out “, Brian declares, to which the response is given, “you may wash up”.
Personally, I was privileged to have Brian as my right man for many years. A good friend, loyal, reliable, totally committed, faithful and with a servant heart. My memories are not just from the summer. Like guard dogs, at a camp reunion we’d position our beds between the boys’ and girls’ dorms to ensure no midnight meetings. At camp and through the year we enjoyed real deep fellowship together.
So why did Brian, (and Jean), spend their summer holidays on Camp? Why did they do this for so many years? One email I received just after Brian died described Brian as ‘a someone whose fervour for young people meeting Jesus was inspirational’. Brian loved Jesus and he wanted other people to know Jesus too.
WEC Camps has a strong discipleship and mission focus. Learning from God’s word, the Bible, is central and Brian was totally committed to seeing young people become, then grow as Christians. Brian was an encourager at many levels too, not least in helping the campers think about those serving God around the world. “Can your missionary afford to buy an ice cream? he would ask, perhaps before we took up the weekly offering. Over the years you would find Brian up front leading meetings, speaking, bringing truth from the Bible, but he was also someone who would work behind the scenes, getting on with those jobs no-one sees, checking this, servicing that, fixing something else.
We are all going to miss him. I’m going to miss his practical skill on set up week too. In recent years others have taken on up front roles, yet with his servant heart Brian was there again as usual last summer, just getting on with what needed to be done, from set up to pack up. We know he did love the old hymns – any excuse to sing Bread of Heaven as grace before a meal, particularly if it was hot rolls for breakfast but he also maintained that ability to engage with young people and encourage them on in their Christian faith.
He often described his role as that of a sheep dog – ensuring those wayward campers got to the right place at the right time. I don’t think we’ll ever know how many young people, wayward in a spiritual sense, have been gently directed into that pen, the Kingdom of God, through Brian’s work, both in word and deed over so many years. Brian would be the first to say it is all of God. He must have the praise and the glory and that is true, but it is also true that God recognises the ‘faithful servant’ who perseveres, even when life is tough, sticks at the task, is in it for the long haul, faithful to the end.
Brian was also a strong WEC supporter in other areas too, attending prayer and regional meetings, sending out A4 papers with testimonies. (WEC’s broadsheet ministry) and going down to help prepare Bulstrode (WEC HQ), for big events, including cleaning the windows and supervising car parking.
I’m sure you’ve heard the quotation ‘well done, good and faithful servant’ many times before. I’m sure that as Brian met his Lord, that is what was said.
Brian died on the morning of Tuesday 13 th February. He is now with his Lord Jesus. We give thanks for his life and all that he did to enrich WEC Camps, Warrior and Teen, over so many years.